So Storytellers is over for another year! A HUGE thank you to my partner in crime Billy (aka William McMartin) for his awesome job on the sound....every artist commented on the great sound and many of the listeners too! You're amazing Billy - love you - love your work! (Will be contacting Lloyds re insurance for your ears!)

There are WAY too many artists to mention separately here (100+), but I was just so blown away by the incredible diversity of songs and styles presented to us over 6 wonderful days of original music. So many new to Storytellers artists too and it was such a joy to share your music! Delivering your song-children to us is something akin to leaving your baby with the babysitter for the first time and we so appreciate that you trust us enough to share! Over 100 of you shared your songs with us over 6 days and it was mind blowing to think that just three years ago- we had just 20 performers over three days!

Our evening shows were incredible - thanks so much to everyone who participated in those - more of those in 2016!!! Audience-wise, we had a full room at various times, and many return listeners who enjoyed Storytellers previously, which was lovely, and all promise to spread the word about Storytellers in the future! We're aiming for quality over quantity and quality listeners we did have - so we're claiming that as a win! Yes, it was quiet at some times, but as long as people keep asking me when we start and when we finish and express disappointment we're not on for all 10 days (God help us!!!) We'll keep going!

We heard many times over festival "If you build it - they will come". What we wanted to build was two-fold; a space for songwriters to share their own songs, and equally a space for the avid listener to hear new music, and not be distracted, and truly we believe we ARE getting there. We had so many positive comments and this buoys us for the future of Storytellers. We heard some new 'favourite' artists, met wonderful new friends and come away from #TCMF2015 inspired and exhilarated.

Thank you for your part in that!

There will be some refinements to come in 2016 so stick around and keep your eyes and ears open! If you build it - they will come!!!

Bonnie Doon - the serenity, duck shooting and The Basin!

Wow what a weekend! 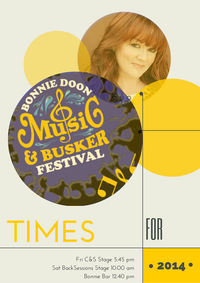 Cathy Dobson and I travelled together up to the inaugural Bonnie Doon Music Festival on Friday afternoon - performing on Friday evening and Saturday!  Friday evening was gorgeous and sunny (hot) but as the sun went down and people came in from work/school, the atmosphere certainly was one of relaxation and music together in one spot!

Great music, great food (twisty fried potatoes!) Thai, pizza, wine, home brew beer and cider, you name it - AND loads of great music!  What more could you ask for - congrats to the organisers - Bonnie Doon Music Festival promises to become something huge!

The Bonnie Doon Hotel looked after us superbly on Friday night too - so next time you're there - pop in for a feed and a drink and a sit in the beer garden!!

The only negative was having the  absolute wits scared out of me on Saturday mornng - apparently it was the opening of the duck shooting season and as Bonnie Doon is in a valley - the echoes of shot guns were so loud - I thought we were being over taken by some anti-music-festival protesters!!!

No matter - we still had a great time!

I also met two wonderful souls in Bonnie Doon (Ben Anfruns and Dr Chantel Fitzsimmons, who are cycling 16000 ks around Australia to raise money for Angel Flight and Neuroscience research Australia....you can read all about their stop in Bonnie Doon here - but have a good read through their blog, and DO make a donation if you can!!!

Cathy and I left Bonnie Doon Saturday afternoon and managed to hit Melbourne just as the storm hit so we were very lucky to not have to drive through it! 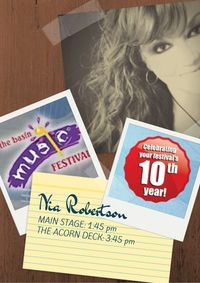 On Sunday - I stayed a little closer to home and Billy and I headed up 'the mount' to The Basin Music Festival, which is the biggest little festival in Melbourne - superbly run, friendly, diverse and never ceases to amaze me - I always discover someone new there!!!  We had a ball!  Billy was in fine form too as always and we caught up with loads of lovely friends and made some new ones too!

A huge weekend of music!

Keep an eye on my gig guide for where I'll be next - loads of great things coming up!